Gracious God, the comfort of all who sorrow, the strength of
all who suffer: Let the cry of those in misery and need come
to you, that they may find your mercy present with them in all
their afflictions; and give us, we pray, the strength to serve
them for the sake of him who suffered for us, your Son Jesus
Christ our Lord. Amen. 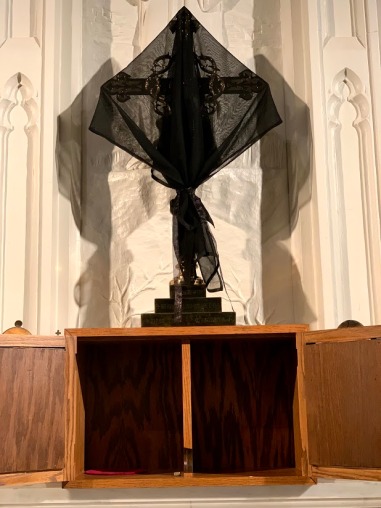 Over the past few years, I have spent more time thinking and praying about Good Friday, than about any other single day in the liturgical calendar. In part, this has come about because I have come to rethink Easter, and Lent. It is also because I have to come to reconsider my life-long belief in a specific way of understanding the meaning of the crucifixion.

As strange as it might sound, this re-examination came about when I joined a crowd of several hundred on 42nd Street in cramming into a sold-out showing of “The Passion of the Christ.” I went to the movie because I was fascinated that there was a sudden and unexpected interest in Jesus. I was quite curious to learn how the Passion was going to be portrayed. I also wondered what it would be like to hear Aramaic, the day to day language First Century Judaism spoken conversationally. I was most grateful for subtitles in English!

The movie turned out to be transformative, though in a way I would never have expected. As the movie progressed, I found that I was literally becoming nauseated! The cruelty and the brutality it depicted made me sick. I found that there was a bizarre sadism at work—an almost glee at what was unfolding. I left the movie wondering what the point had been? It seemed that the primary point was to show how brutal the torture and execution of Jesus had been. Surely there must have been more than just that!

Some historians have spoken of two besetting sins of the United States: chattel slavery of enslaved Africans and their descendants; and the genocide of Native peoples. Christianity too has a begetting sin: Antisemitism!

If someone had to be blamed for the death of Jesus, many Christians chose to singe out the Jewish people as-a-whole. Narrow fundamentalist and literalist Christians failed to distinguish between Jewish authorities such as the High Priest and the Sanhedrin (who tried and condemned Jesus, and then turned him over to the Roman authorities) and the average first century Jew in Jerusalem (who had no power to influence or impact these kind of decisions). Horrible charges of deicide and blood libel were made against innocent Jewish communities-which were already forced to live in ghettos or villages at some distance from “Christian dwellings.”

For these poor, abused, and exploited Jewish settlements, the single worst day of every year was Good Friday. On that day, following the reading of the Passion from the Gospel of John, vigilantes—fired up by preaching in the Churches, attacked the villages and individual Jews. The atrocities were unimaginable! Sadly, these attacks were often condoned by Christians and Christian authorities. Even if they thought such actions were wrong, they rarely seem to have spoken out against it.

This approach also let the Roman authorities off the hook. In the end, it was Pontius Pilate who made the decision to crucify Jesus. It was Romans who finally condemned Jesus to death, and who carried out that execution.

Another issue is that all of this makes Jesus appear very passive. In this view, things happen to Jesus. His role is to passively accept, “like a lamb led to the slaughter.” My reading of the Passion Narrative shows Jesus as someone who is active. And here is the good news. The active love of Jesus transforms the horrible things which happen to him and makes of them an offering—a sacrifice. Remember that the etymology of sacrifice is sacra facere, which literally means “to make holy.” Jesus chooses to forgive those who hurt him, never stops loving everyone, and offers hope and consolation to the other victims who are suffering with him. Jesus is the High Priest who lovingly pours out his life on the altar of the cross. From his own wounded side flow the healing water of Baptism and the Blood of the New Covenant.

What about God? I am troubled by ideas which suggest that God had always planned the death of his beloved Son on the cross. Even worse is language which suggests that this was almost like a legal transaction in which God demanded a bloody and brutal price to atone for human sin. While all of the Christian Scriptures were written in retrospect—looking back on Good Friday and attempting in a limited way—the best that we could ever do—to make sense of what happened, it seems apparent, at least to me, that God too mourned during the Passion and death of Jesus.

God, though, was present to Jesus at every moment. It was the knowledge of his Father’s unconditional and absolute love for him which allowed Jesus, in turn, to extend that same love, even to those who tortured and killed him. God took and transformed the self-offering of Jesus and changed all of human history by raising Jesus from the dead. Resurrection was God’s response to human violence and cruelty. We offered death, God offered and offers life!

St. Paul reminds us that each of us who has been Baptized in Christ was buried with Christ in death and raised with him to the new life of Resurrection. This means that what happened to Jesus also happens in our own lives. The cross of Christ is not only something which happened to him. Every hurt, every pain, every sorrow that we will ever experience is united to the sacrifice of Jesus on the cross. The letter to the Hebrews reminds us:

“Since, then, we have a great high priest who has passed through the heavens, Jesus, the Son of God, let us hold fast to our confession. For we do not have a high priest who is unable to sympathize with our weaknesses, but we have one who in every respect has been tested as we are, yet without sin. Let us therefore approach the throne of grace with boldness, so that we may receive mercy and find grace to help in time of need. In the days of his flesh, Jesus offered up prayers and supplications, with loud cries and tears, to the one who was able to save him from death, and he was heard because of his reverent submission. Although he was a Son, he learned obedience through what he suffered; and having been made perfect, he became the source of eternal salvation for all who obey him.”

As we take up and carry our own cross, we have the opportunity to extend love to anyone who suffers, to anyone in need, to anyone who is neglected, abused, oppressed or mistreated. God will receive our own offerings, unite them to the sufferings of Christ, and will make of them a source of healing and love.

As the primitive church in Antioch learned, that kind of love will be so different and so obvious that it will be impossible to miss in our world. By that love the world will know that we are disciples of our Lord. Who knows, it might inspire them to be open to also taking up their cross?

As the words from the Stations of the Cross remind us, “We adore you, O Christ, and we bless you: Because by your holy cross you have redeemed the world.”