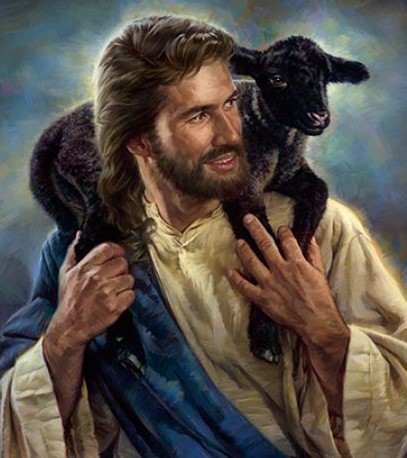 Heavenly Father, we thank you that by water and the Holy
Spirit you have bestowed upon your servants the
forgiveness of sin, and have raised them to the new life of
grace. Sustain them, O Lord, in your Holy Spirit. Give them
an inquiring and discerning heart, the courage to will and to
persevere, a spirit to know and to love you, and the gift of joy
and wonder in all your works. Amen.

1) Hark! ’tis the Shepherd’s voice I hear,
Out in the desert dark and drear,
Calling the sheep who’ve gone astray,
Far from the Shepherd’s fold away.

This lovely hymn from my Baptist childhood uses one of the most familiar images of Jesus—in it he is described as a compassionate shepherd who searches for the lost sheep, who rescues them from danger, and who lovingly brings them home to safety.

The Great and Glorious fifty days of Holy Pascha, of Easter, share a common element with the Holy Seasons of Advent and Lent. Each of them is divided by a special Sunday: the Third Sunday of Advent is called “Gaudete” Sunday, the Fourth Sunday in Lent is called “Laetare” Sunday, and the Fourth Sunday in Eastertide is called “Good Shepherd” Sunday. In each case, these Sundays provide a moment to pause and reflect—the season is now halfway completed. They also provide an invitation to refocus and to concentrate on an upcoming reality: The Nativity of the Lord, Holy Week and Easter, and the Feast of Pentecost.

Good Shepherd Sunday takes us by surprise. In the past weeks we have been reminded of those first Post-Resurrections of the Lord to the Apostles, gathered in the “Cenacle” or the Upper Room, to those same Apostles one week later (with the inclusion of Thomas), and to the Disciples, on the Road to Emmaus. Today, we switch to the Gospel according to Saint John, and hear the surprising moment of self-revelation in which our Lord speaks of one of the primary ways in which he will be understood by the Apostles and Disciples as they begin to proclaim the Good News “to the ends of the world.” It also connects with their preparation for the coming Pilgrimage Feast of Shavuot, fifty days after the Passover, known to us, more commonly, as Pentecost—from a Greek word meaning fifty.

Anyone who heard the term, “Good Shepherd,” in the First Century Jewish world, would have probably thought that was an oxymoron. Good Shepherd? There aren’t any! The general stereotype was that shepherds were a disreputable group. Most of them were hired hands. Few of them were believed to be honest or trustworthy. It is no mistake that the term “sheep stealer” was in common use. Even if exceptional shepherds were “above board,” they were still considered to be ritually unclean. They were dirty, filthy, unwashed, and smelly. They lived on the fringes of society. Mommas did not want their babies to grow up to be shepherds.

And yet, the Scriptures—Hebrew and Christian—challenge this stereotype. David, the greatest king, was a shepherd as a boy. Using the same sling with which he defended the sheep entrusted to his care, he brought down the mighty Goliath. The Twenty Third Psalm movingly speaks of God as a shepherd—and in these days of pandemic, those consoling words of God’s presence with us even in the shadow of death, are especially meaningful. In the second chapter of the Gospel of Luke, the first announcement of the birth of the Christ, the Messiah, comes to shepherds in the fields, watching their flock by night. On the far outskirts of society, lonely and rejected, they are the first who come to worship. As is so often the case, this passage makes clear the surprising—even shocking– inclusivity of God’s love for all.

One of the things which is most surprising about the Good Shepherd, in the Gospel of John, is the deep connection of love, respect, and intimacy between the Shepherd and each sheep. For the Good Shepherd, the sheep are not a commodity, or an item to be valued only for what they produce (wool) or the product which they could become (mutton or sheepskin). They are inherently worthy of love, care, and respect. The shepherd knows them so intimately that he names each of them. They love and trust the shepherd, in return, and know his voice. They will only follow him—and no one else. The shepherd cares for his sheep so profoundly that he will do whatever it takes to protect them and to keep them safe—even to the point of sacrificing his own life, if that is necessary.

What is not clear here, is that sheep are not the brightest or the wisest of animals—when I lived in France for a semester in 1981, the young daughter of the family with whom I lived had a favorite word-“ bête.” As Sophie used it, it clearly meant “stupid.” Literally, it means “sheep.” “You are a dumb lamb!” Sheep are easily distracted, and have a propensity to scatter, to run away, and to become lost. As they go exploring, they give little thought to danger. Before they realize it, they have become lost, frightened, and are in danger. The bleating cry of the lost sheep is especially sad. They are not capable of finding the shepherd or the flock again.

The shepherd must go looking for them. There is that beautiful line from the 53rd chapter of the Prophet Isaiah which I memorized so many years ago as a Baptist child in summer Vacation Bible School, “All we like sheep have gone astray; we have turned everyone to his own way.” So many of those paintings—and stained-glass windows—depicting Jesus as Good Shepherd—show him carrying, in his arms, a single lost sheep whom he has rescued from the “desert, dark and drear.”

The Christian Church has traditionally seen, in today’s Gospel, allusions to the Sacrament of Holy Baptism. In Baptism, each lost sheep, is rescued by Jesus. Each sheep is named—some cultures use the term “Christian name.” Each sheep is signed with the cross and anointed with consecrated oil, and thus is “claimed as Christ’s own forever.” Each sheep is then welcomed to the flock of Christ, to the household of God. And, we are reminded that our Lord is not only the Good Shepherd, he is also the “Lamb of God who takes away the sins of the world.” Our Good Shepherd actually did lay down his life to protect us, for our well-being, health and salvation.

2) Who’ll go and help this Shepherd kind,
Help Him the wand’ring ones to find?
Who’ll bring the lost ones to the fold,
Where they’ll be sheltered from the cold?

3) Out in the desert hear their cry,
Out on the mountain, wild and high;
Hark! ’tis the Master, speaks to thee,
“Go, find My sheep where’er they be.