A Sermon for the Fourth Sunday after Pentecost
Pride Sunday
June 28, 2020

If I were asked to list the top ten most significant or valuable concepts or insights which are found in the Hebrew and Christian Scriptures, in the top three, I would list hospitality. In fact, hospitality is such an essential component of the overall message of those scriptures that if you were to remove it, those scriptures would not have the same meaning, the same promise, and the same challenge.

One way to understand the People of Israel is that they were–individually and collectively–called to practice the ministry of welcome, of hospitality and of inclusion. This action on their part was to be an act of gratitude for the love and hospitality which God had already extended to them through numerous acts of generous love—in the covenants, in the giving of the law, and in the promise that—as a people on a journey—God traveled with them as they went on the way.

The visitor was sacrosanct. The arrival of a visitor was not an interruption—it was a cause for celebration. It was a pleasant surprise! Everything stopped. All at once, the whole mindset of the household changed. They switched into “hospitality mode.” It was all about a connection, a relationship, an interaction which had value and meaning-in-itself.

Even names were given to ritualize and to explain what was happening. The person who welcomed the visitor was called a “host,” or a “hostess.” They opened the door, greeted the person who was there, invited them in, and did everything in their power to make them feel welcome, appreciated, and cared for. The person who showed up—probably without warning—was called a “guest.” They were not a stranger, a foreigner, an outsider, or an interruption—they were to be received and treated as “one of the household”—as a member of the family.

In various Mediterranean cultures, there is a remnant of this idea. In Spanish, for instance, a guest will often hear the phrase, “Mi casa es tu casa.” We usually translate it as “My house is your house.” But I think that is a poor translation. What it really is saying is “this is your home. You are welcome here. Come in. Take your shoes off. Make yourself at home, feel welcome, feel comfortable, feel free to be yourself. Relax. Enjoy. Celebrate with us.”

When the guest arrived in the Biblical accounts, he or she was received with ritual, and with ceremony. The sandals were removed, the feet were washed—and perhaps anointed with fragrant oil. Remember that there were no water fountains or refrigerators. Water was a scarce commodity. Someone had to walk to the well, to the wadi, or to the creek and haul it back in a vessel of some sort. It might be stored in the shade or in the coolest part of the tent. How good that water would have tasted on a hot day. How refreshing that water would have felt on those tired, and dusty feet.

And then, there was a meal—perhaps even a party. The whole community might even be invited. After all, the visitor would have news to share and stories which would inform and entertain. Food would be prepared—not the ordinary run-of-the-mill home cooking. A feast would be prepared! The very best would be brought out and shared. They might even slaughter the fatted calf—the poor fatted calf rarely has a happy end to the story—but that is a topic for some other sermon! All of this, of course, took time. No one was in a hurry. While the meal was cooking, and the table prepared (obviously women and slaves did the hard work of hospitality) there was time to talk, to sing, to tell stories, and to share food and drink.

The interesting thing is that the hospitality was done without the expectation of any return. The presence of the guest was viewed as a gift, and as a blessing. Hospitality was a way of acknowledging that gift and of attempting to celebrate it. There was a traditional notion that the guest might offer something especially important—they might offer a blessing for the hospitality which they had received, they might give thanks, and in doing so, they might convey the very blessing of God. In Greek that “thank you,” that blessing was truly “good grace,” ev charisto—”Eucharist.”

Jesus spoke to his closest friends about hospitality. He reminded them that they were on a mission, they were on a journey. They were travelers on the way. They must depend on others for welcome, for refreshment, for hospitality. They may not even have a simple home warming gift, or a host gift to offer. But they did have something of value. They carried with them the good news of God’s welcoming and inclusive love for all. Anyone who welcomed them, who made room in their home or at their table for these messengers of God would welcome, not only them, but the one who sent them. In welcoming the disciple, God would be invited in, and would be made welcome. God would sit down with them at table and be one-with-them.

Many Christian communities, both in the United States, and around the world, use another name for the last Sunday in June. It is also “Pride Sunday.” It is a day of acknowledgement and of thanksgiving for the presence of LGBTQIA persons in our communities. It is a day in which we give thanks for the acceptance and inclusion of LGBTQIA persons—not only in our churches—but in our families, among those we count as friends and colleagues—and in our society at large.

We celebrate legal victories: the right to marry, the right to equal protection under the law, and of protection from many forms of discrimination. We recall the Stonewall Revolt, the martyrdom of Harvey Milk, and the countless marches and protests which followed. And yet, we acknowledge that the full work of inclusion has not yet been completed.

In reflecting on the importance of Stonewall, some 51 years ago, Representative Joseph Kennedy of Massachusetts had this to say, “”When the police officers moved in to try to clear out and arrest the patrons at a gay bar. And it was in the early hours of the morning when patrons inside said no! And part of the resistance was started by a black, trans woman, Marsha Johnson, who threw the shot glass heard round the world. Picked it up, threw it at a mirror, shattered the mirror. The resistance that spun into the hours and then the days, and then the celebrations of Pride that sparked out of that as a recognition of what happened.” 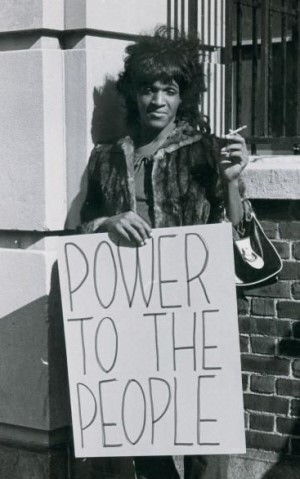 In reflecting on the success of Stonewall, Dr. Eric Cervini, the author of The Deviant’s War: The Homosexual vs. the United States of America, commented that LGBTQIA rights was only possible because of the insights and gains already made by the Civil Rights movement and by the Women’s Rights movement. Stonewall did not happen in a vacuum. In a country torn apart by the Vietnam War, people had learned the power of taking to the streets to agitate for change.

Today, we are confronted with a difficult—with a painful truth. Among the most vulnerable members of our society are our Trans Siblings—and especially our Trans Siblings of Color. In 2020 alone–this year–in the United States, 16 Trans or non-gender binary persons have been murdered! Almost without exception, these are persons of color! We hear this on the news every few weeks—and yet, it seems that nothing is being done to stop this massacre. Lest we be tempted to think that this is something which happens elsewhere, Dominique “Rem’mie” Fells, a Black transgender woman was killed in Philadelphia, Pennsylvania, on June 9th. This was a brutal murder. After her death, Rem’mie’s body was mutilated and she was tossed into the Schuylkill River—like refuse, like trash.

God reminds us that we must practice hospitality, welcome, and radical inclusion! We must make a place in our hearts, in our homes, at our tables, in our church, and around God’s altar—for everyone. When we receive the least of these-our beautiful and vulnerable Trans Siblings—we receive and protect Christ. We receive, embrace, protect, and shelter God.

2 thoughts on ““Come on in and make yourself at home.””